TV Bet
Home Betting Guides To Cash Out Or Not To Cash Out? That Is The Question

To Cash Out Or Not To Cash Out? That Is The Question

It’s arguably the biggest game-changer to the online sports betting industry in the past 10 years and is something that has punters across the globe asking: to Cash Out or Not Cash Out?

Even non-gamblers will have been subjected to the term Cash Out in recent times, through advertising campaigns and other promotions. But what exactly is ‘Cash Out’ all about?

What Is Cash Out Feature? 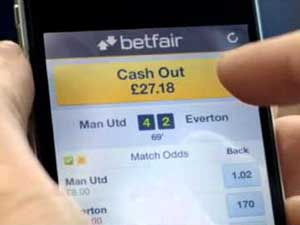 The Cash Out feature is one that allows punters to accept a return on their bets before the event has reached its natural conclusion. This means that customers can change their minds whilst their bet is in play, thus giving them more control and a much greater chance of securing long-term profits.

Originally, the feature was exclusive to the likes of Betfair and other exchange markets where punters are essentially wagering against each other rather than the house. The Cash Out feature was essentially a by-product of the nature of Betfair’s business model, which allows traders to ‘back’ and ‘lay’ selections.

It was only inevitable that bookmakers would catch on to the merits of this feature and by incorporating it into their own software they now have another boasting tool in the bid to win new custom.

Over the past couple of years, the presence of Cash Out has enjoyed a meteoric rise and most of the big firms now offer this service. In fact, bookies like Unibet have even introduced a partial Cash Out system, giving customers even greater control than ever before.

Whether it’s used to guarantee profits or minimalise losses; the Cash Out tool is a fantastic addition to a punter’s arsenal in the bid for long-term success.

Which Bookmakers Offer Cash Out?

A number of online bookmakers offer the service via web, mobile betting, or both channels. The list includes, but is not limited to;

Considering the success of this relatively new betting tool, we can only assume that list will grow over the coming years.

When Should I Be Cashing Out My Bets?

Different punters have contrasting views on the whole Cash Out concept and for every gambler that uses it on a regular basis there will be another who simply refuses to trade out early, arguing that they wouldn’t have placed the bet if they weren’t confident before hand to suggest letting it run is the only logical option.

Deep down, though, it’s far more complex than a simple ‘yes’ or ‘no’; in our opinion, each individual bet should be judged on its own merit.

If you’ve got a bet on Barcelona to win by 3+ goals and they’re already winning 5-0, then it would be ludicrous to give any of your winnings back to the bookie, even if it’s only a couple of pounds. Patience is a key asset for any punter; if your bet is definitely going to win, it would be foolish to cash out. Period.

On the other hand, if the same game is only 3-0 and they’re offering a decent return then it could be worth considering. Likewise, the Cash Out feature can be very handy on accumulators when all teams are winning but several are in potentially precarious scenarios.

The other time to consider Cash Out is when your bet appears to be dead. How many times have you ripped up a betting slip before the final result has been confirmed? Nobody would turn down a partial refund on any losing bet, even if it’s only 5%. Be careful, though, as nobody wants to take a big hit on a selection that eventually goes on to win.

Ultimately, there is no definitive answer as to whether cashing a specific bet is the right or wrong move and, like betting, it is essentially a game of opinion.

The one thing we do know is that irrespective of how often you use it, Cash Out is a fantastic option to have and gives punters an extra edge in the bid to beat the bookie.

The betting predictions published in our newsletter and on the TVbet.co.uk website are meant only as an opinion and we cannot be held responsible for any losing bets that may come as a result of following them. Always know your limits – Have a staking plan – Bet responsibly.